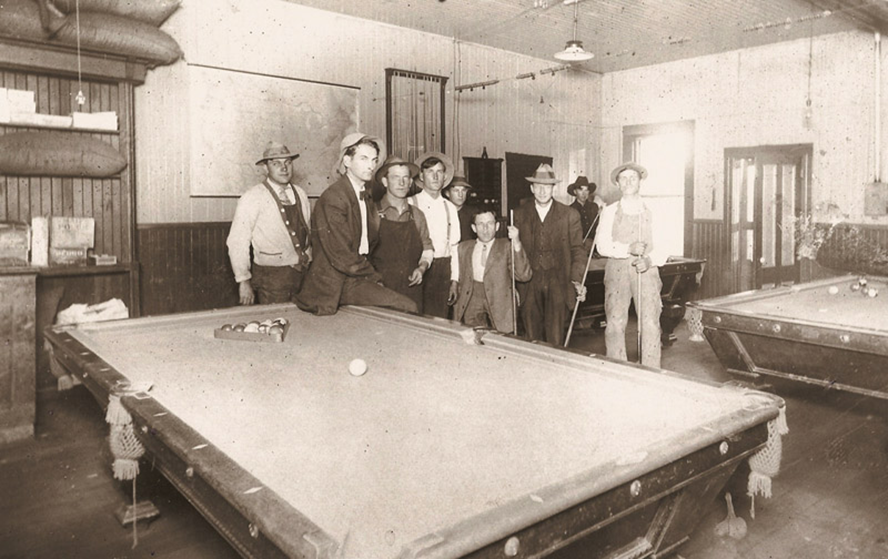 Known as “America’s oldest billiards and pool room”, Orton’s is sure to have a ghost or two. Established in 1888, Orton’s Pool Room was located in the basement of the Orton Hotel which burned down in 1949. The pool hall in the basement survived and still operates today.

Staff and customers talk of strange happenings with items falling off walls, slamming doors, and moving eight balls! Rumor has it the ghost was the only victim of the 1949 fire and if he takes a liking to you, he’ll help your game.

Famed pool player Willie Mosconi grew up playing pool with potatoes and broomsticks in his father’s pool hall; and while he isn’t the ghost behind the unexplained, Masconi did visit the pool hall in November of 1953. It was then that he achieved the world record for pocketing 365 balls in a row.

Did the Orton’s ghost give him a hand? Guess they took that one to the grave…

Located in Fort Worth, TX Fast Freddy’s Pool Hall was once the favorite haunt of pool legend, U.J. Puckett. At a young age Puckett found he had a talent and started reading more about the game… He would go on to beat many great players and win the national nine-ball title. After appearing on 60 minutes, he joined ESPN’s Legends of Pocket Billiards, a competition among some of pool’s great names such as, Lassiter, Mosconi, Minnesota Fats, and Cowboy Jimmy Moore.

Puckett died in 1992 and is suspected to still be haunting Fast Freddy’s. Employees and patrons alike circulate rumors of late night stomping and flying cue sticks. Some attribute the happenings to the disturbance of Puckett’s favorite chair near his favorite pool table. A clairvoyant was brought into contact Puckett and after feeling his presence near the chair, advised that no one even sit in the chair, and not surprisingly, no one does.

Since Pool Tables Plus is located in New Jersey, it made sense to include a spooky pool hall and ghost from this fine state. However, thorough research brought nothing except that New Jersey is clearly exempt from hauntings in pool halls. While he may not currently haunt, this player once called New Jersey Home.

Steve Mizerak obituary states, “’When I was 4, my father placed me in the middle of a pool table, handed me a cue stick, and I sank the eight ball in the side pocket,’ Mizerak once recalled.” It’s not surprise that New Jersey born Mizerak would go on to make a name for himself. In 1970 through 1973, he won the United State Open in pocket billiards and then won the Professional Pool Players Association World Open from 1982 to 1984.

Mizerak went on to promote Miller Lite and appeared in a number of ads over the years. He kept busy writing instructional books, selling billiards equipment, and founded a senior tour for professional billiards players. Mizerak died in 2006, but clearly left a stamp on the world of billiards”